TWO DAYS ONLY AT CHUNGKING STUDIO!

MAGIC AND REALISM, a Month of Photograph Los Angeles-Featured Event, is a two-person show with fellow photographer Bill Leigh Brewer, curated by art critic Shana Nys Dambrot, and featuring all new, never seen work. This will be a big night in Chinatown, with art openings at all the galleries on Chung King Road. If you can only make one of my shows this year, this is one to see... 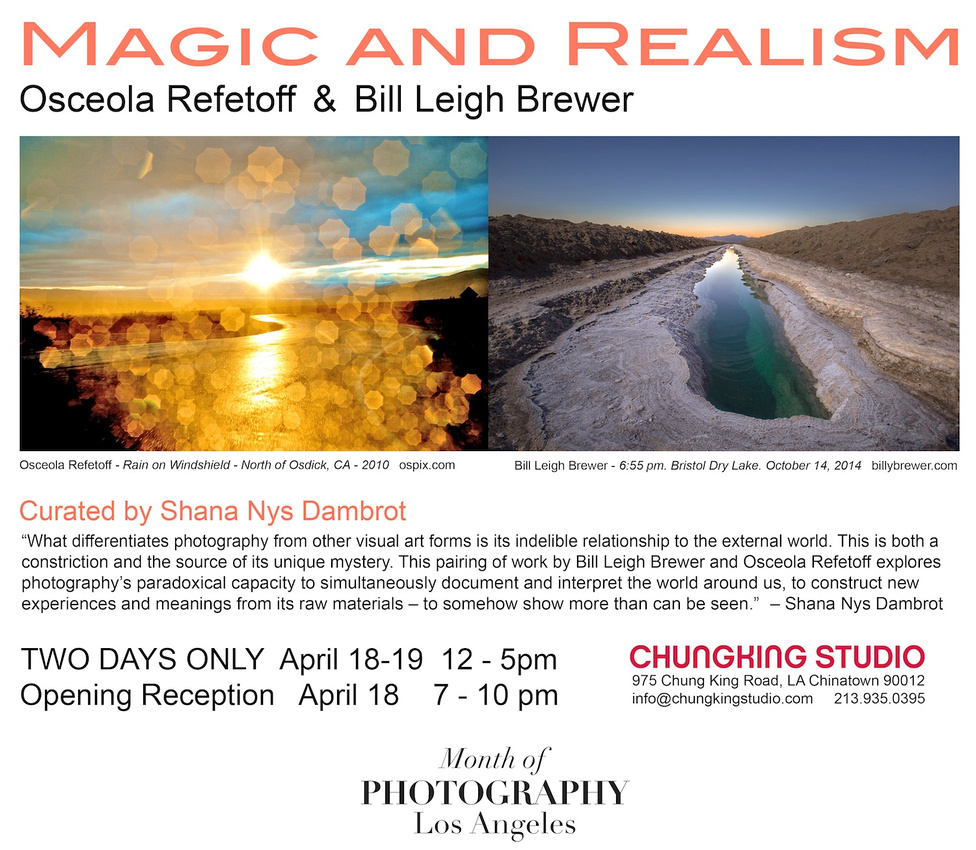 Magic, truth, objectivity, reality. What differentiates photography from other visual art forms is its indelible, inescapably direct relationship to the external world. This tether is both a semiotic and technological constriction, a challenge that has given rise to a seemingly endless debate about photography’s status as a “fine art” rather than say, an “applied art” -- and is ultimately also the source of its unique, evolving appeal.

The pairing of work by photographers Bill Leigh Brewer and Osceola Refetoff -- contemporaries working independently -- explores photography’s paradoxical capacity to simultaneously document and interpret the world around us, to elicit fresh details and construct new experiences and narratives from its raw materials. The interaction between their work is particularly well suited to exploring this dynamic, because Brewer and Refetoff are uncannily drawn to many of the same specific topographies of desert and industry, yet they return with vastly different works of art.

Some of these differences result from the intentionality of how they work. Brewer could be said to work somewhat loosely, guided more by cultivated serendipity than by an agenda -- his camera functioning as an extension of an intuitive attention, his series grouped by evocative formal or narrative suggestions in a subsequent process sorting the harvest of his wanderlust. Refetoff, for his part, sets out in a nearly cinematic quest for certain specific stories he feels require telling, set against and among the details and vistas of an archetypal set of lands -- speaking directly to how humans have historically manipulated these lands throughout the mythology of the American West.

By considering them together, it is our hope that not only will further facets of their individual practices be highlighted, but so will certain fundamental circumstances of their shared medium’s paradoxical ability to preserve evidence of actual events while sustaining personal interpretation, in so doing reconciling documentation and invention, experience and imagination -- and, by somehow showing more than can be seen, to reconcile magic and realism.

Hope to see you!